Nerf DinoSquad Rex-Rampage Blaster is a beast, ready to be let loose. Soon you open the box you will see every fierce detail, every snarling fang, and an awesome green-painted body that’s so cool to look at. Not only its look, but it is also way more fun to use. Harness the extraordinary force of the greatest dinosaurs of all and blast into amazing adventures! Blast into battle with the power of a T-Rex with the Nerf Rex-Rampage blaster!

Amazon.com
It features an awesome dinosaur design, capturing the look of a Tyrannosaurus Rex dinosaur. Rev up the motor on this motorized blaster and press the trigger to fire darts fast. It comes with a 10-dart clip so you can send 10 darts in a row racing through the air at your targets. There’s onboard 10-dart storage on stock to keep backup firepower nearby for reloads. The blaster includes a nonremovable targeting scope to line up your shots. It comes with 20 Official Nerf Elite foam darts that are tested and approved for performance and quality.

[Click any image below to view Full size on Slider]

It’s important to make sure that the kids are wearing protective goggles and gear when they load up and start playing. Goggles/ Eyewear is recommended but not included in the pack.
What’s that growl? Must be that motorized blasting power! Press the accelerator button to power up this blaster. Aim and press the trigger to send some darts flyin’ towards the target. It’s time to stomp into battle!

The Nerf DinoSquad Rex-Rampage Blaster looks super cool with orange and green colors throughout that really bring it to life. Of course, those Nerf darts that come flying out of the T-Rex’s mouth – can’t go unnoticed. The teeth look sharp but super safe! When kids holding the Nerf DinoSquad blaster, they’ll look as fierce as their T-Rex ally. The blaster is so much fun right out of the package.

WARNING – TO AVOID EYE INJURY:
• Do not aim at eyes or face. Use of eyewear is recommended for players and people within range. Use only official Nerf darts. Other darts may not meet safety standards. Do not modify darts or blaster.
• Small parts may be generated. Not for children under 3 years. 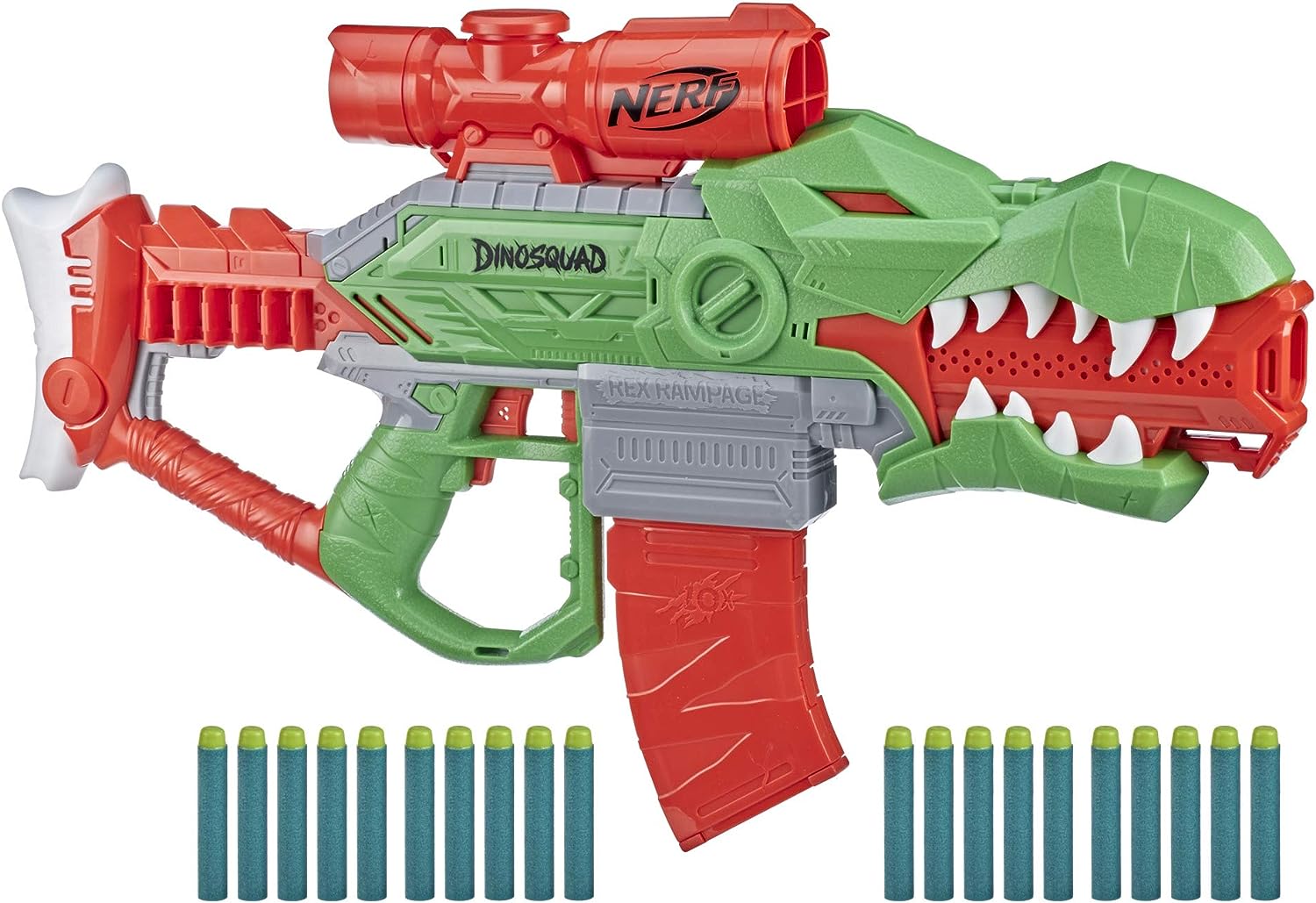 • Blast into battle with the power of a T-rex with this blaster
• Features amazing dinosaur details, capturing the look of a Tyrannosaurus Rex dinosaur
• Fires darts fast with motorized blasting
• Power up the motor and pull the trigger to send darts flying fast toward targets
• Fire 10 darts in a row and comes with a removable 10-dart clip
• The blaster includes a nonremovable targeting scope to line up your shots
• Comes with 20 Official Nerf Elite foam darts
• The blaster has onboard storage for 10 darts, to keep them within easy reach for reloading
• Requires 4xAA alkaline batteries, not included
• Perfect for backyard stompers ages 8 and up