Amazon.com
When it comes to miniature battling warriors, the Legends of Akedo are in a class all their own. With their amazing abilities and next-level intensity, these little legends are sure to become your new favorite way to battle! The objective of the game is to tag out your opponent by using a variety of offensive and defensive moves.

In order to win, you must be strategic, quick, and strong. The Akedo Powerstorm Arena is the ultimate test of these skills. Choose your Warrior, battle with fury, and finish them with a Split Strike! With the All-New Powerstorm Series, there are 42 new epic Mini Battling Warriors boosted for Elemental Battle Action! 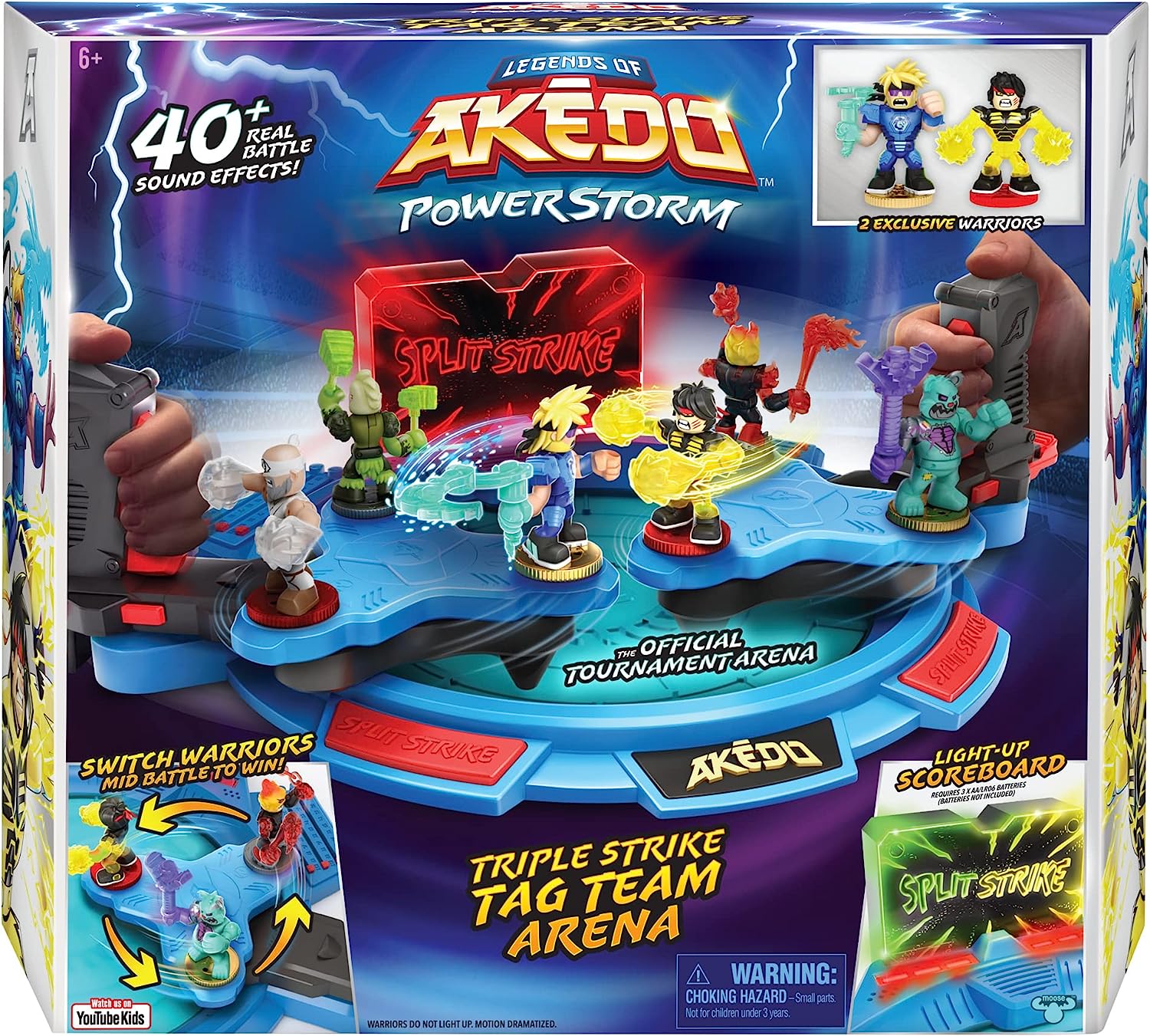 Battle In The Triple Tag Arena! 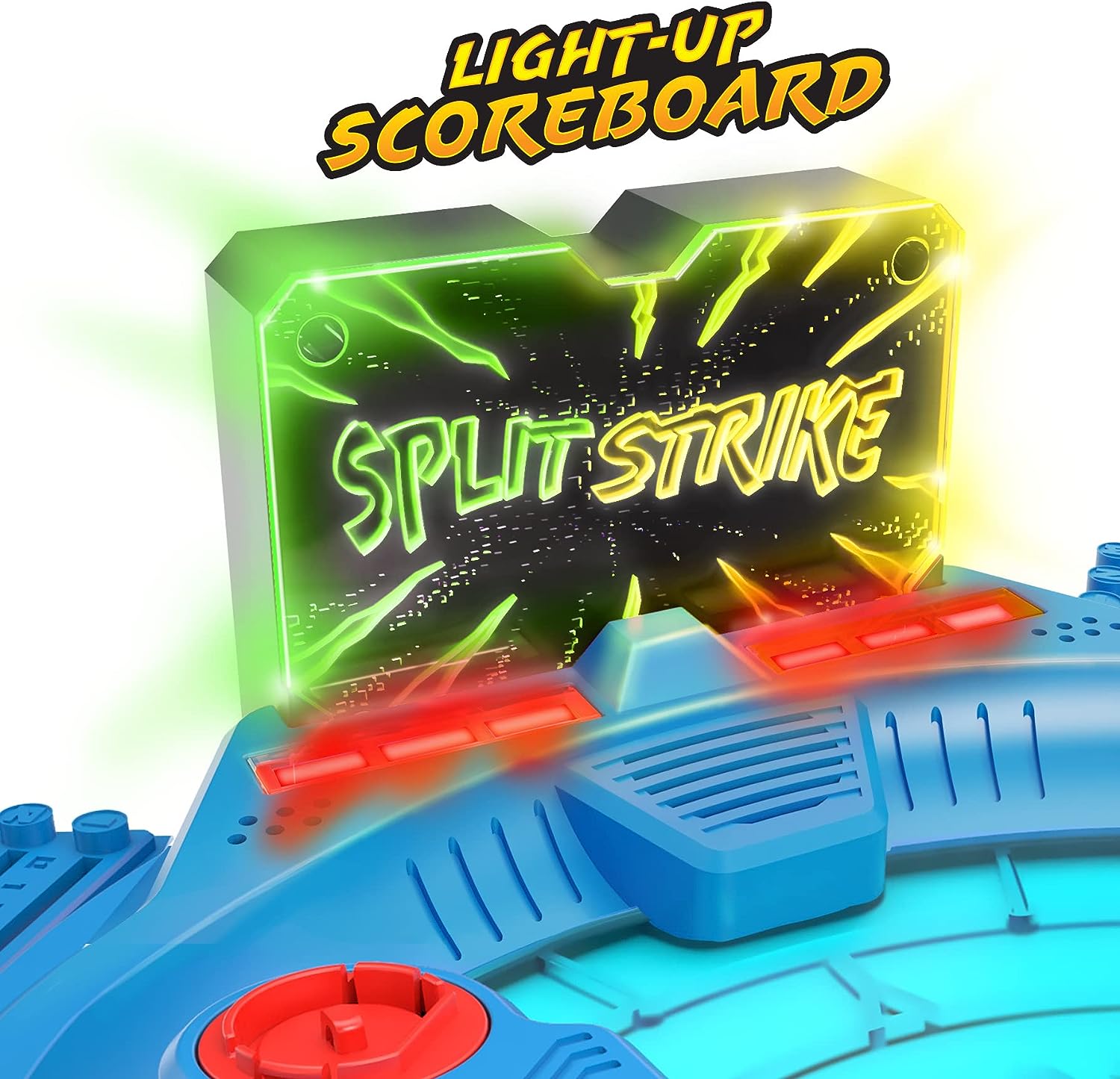 In the game set, kids can now battle it out with their friends using the new Triple Strike Tag Team feature. With this new feature, players can rotate their Warriors in the Arena and switch them mid-battle. This allows for more strategic gameplay for everyone involved. The controls are really simple, and the game is just a lot of fun. You can tag in and out of the fight, and you can use special moves to beat your opponents. If you think you’re fighting a losing battle, tag In your next warrior. Turn the tide of any battle, snatch victory from defeat and come out on top! So don’t give up when the going gets tough – tag in your next warrior and claim victory! 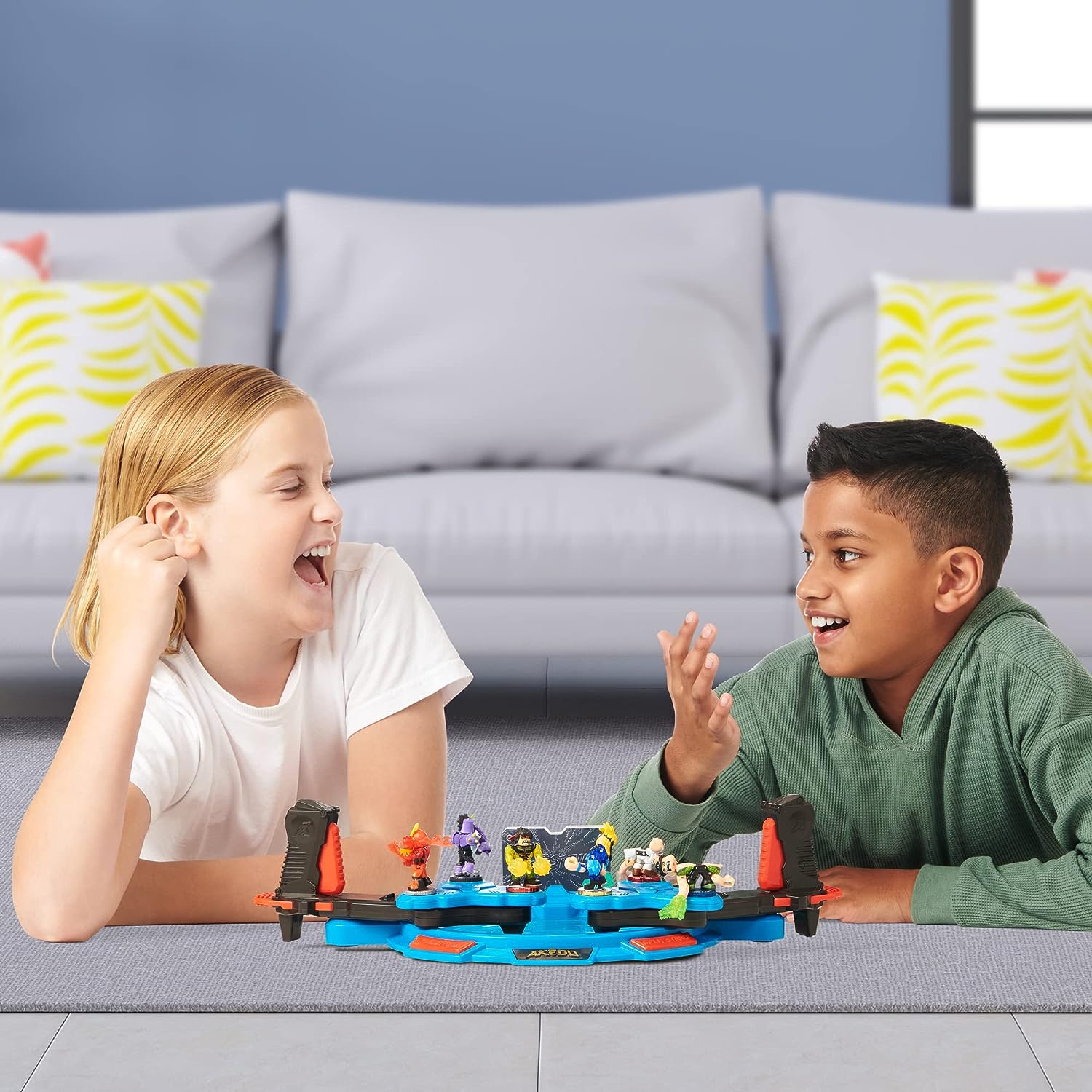 This toy is perfect for kids 6+ years old and those who love to play with friends and family.
Let’s make some noise! As they fight it out in the Akedo Arena, they will hear over 40 real battle Sound Effects blast out making the fight super real and extra exciting. If you love the sound of high-impact action, you’ll love the new Legends of Akedo Powerstorm Triple Strike Tag Team Arena Playset! This arena sounds as good as it looks! 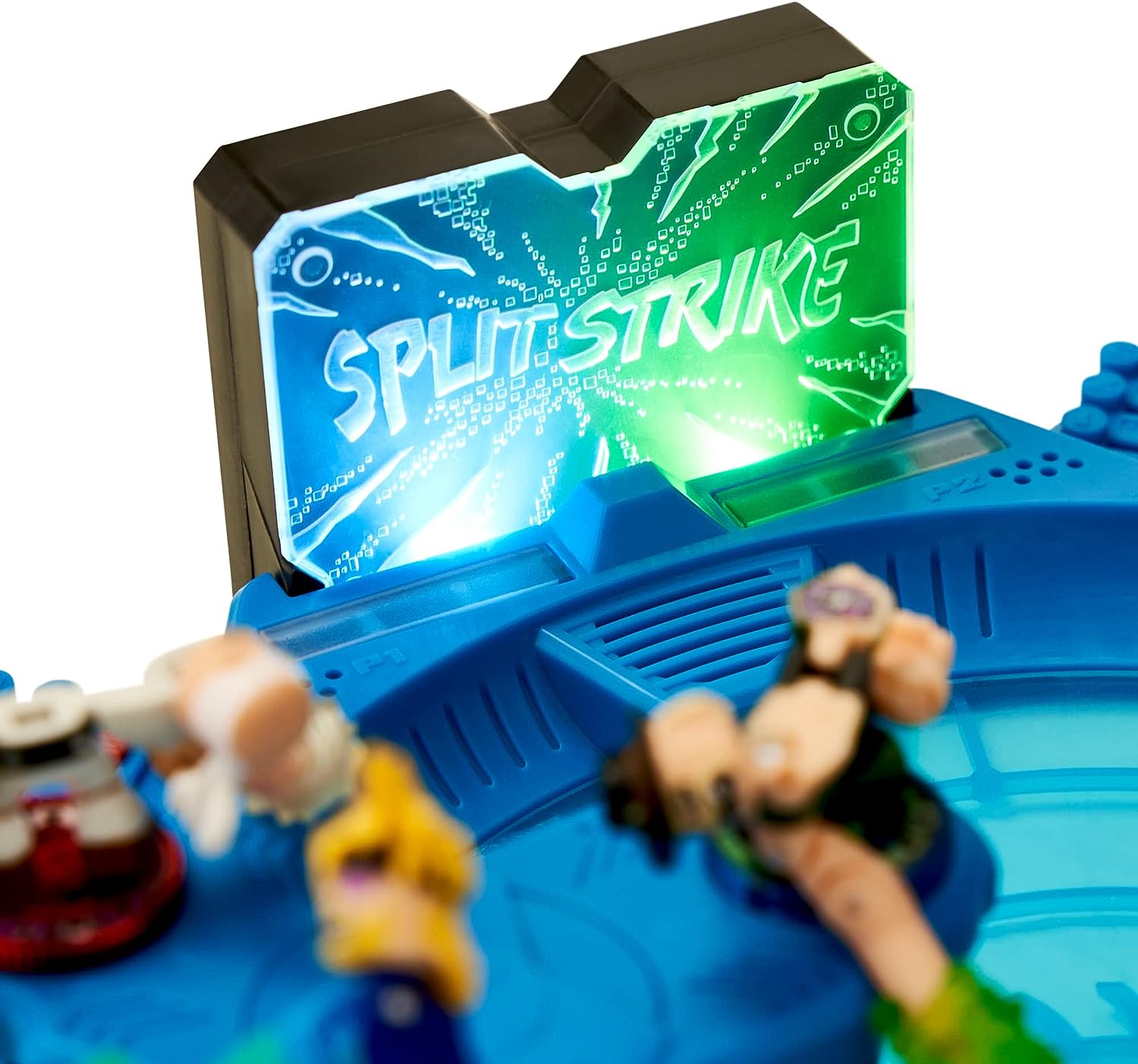 When kids get a Split Strike, they can press their Split Strike button and see the Scoreboard light up. This is a great way to keep track of their points and see how well they’re doing. They’ll love this action-packed game that lets them battle it out with their friends. The atmosphere in the Triple Strike Tag team Arena is awesome and the fans are always hyped up for the action! 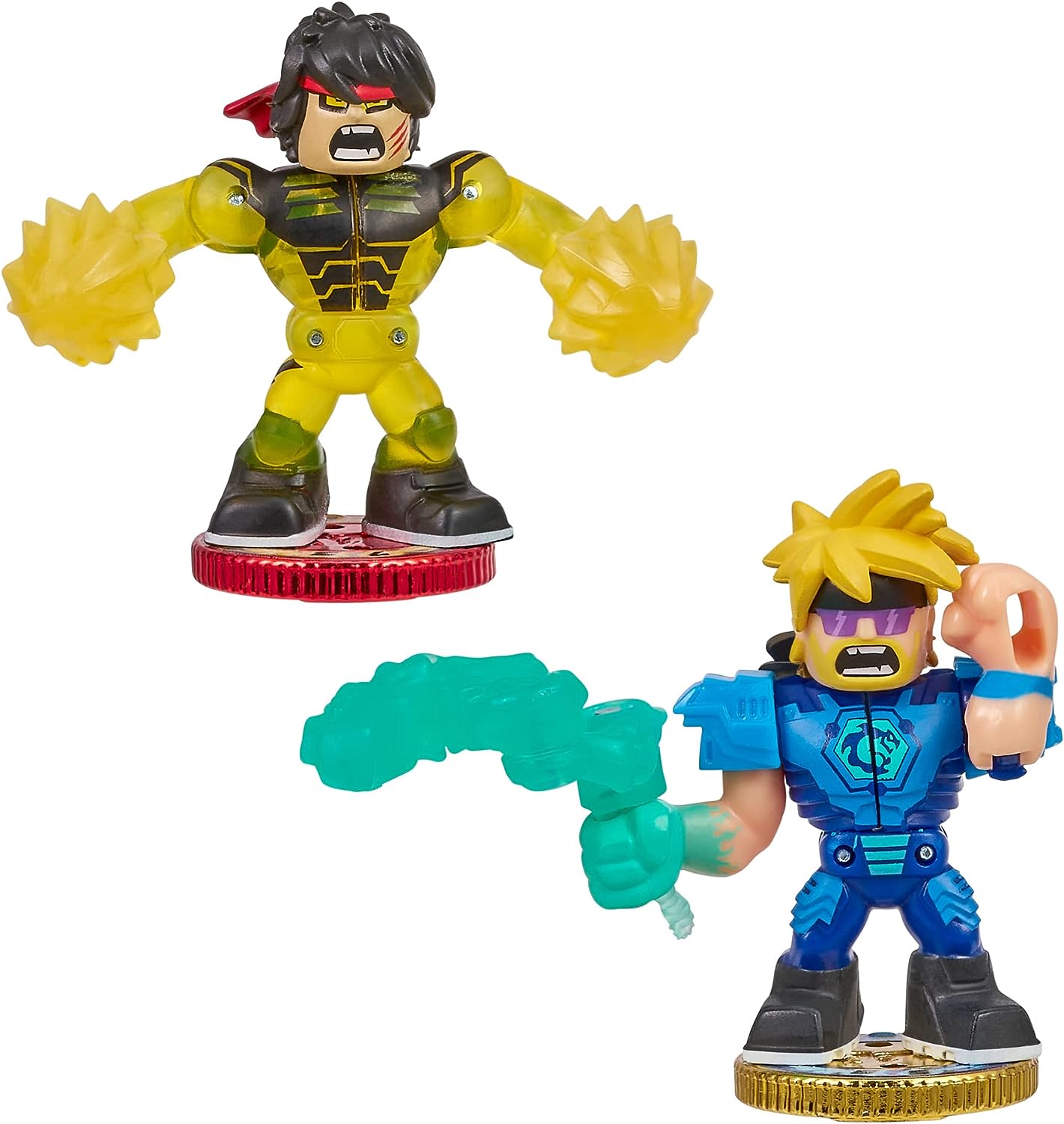 Come one, come all to the Triple Strike Tag Team Arena! Here, you can build your very own Ultimate Akedo Warrior Team and take on all comers in thrilling tag team battles. This amazing Pack contains two exclusive Warriors only exclusive to this playset! This Arena is the ultimate destination for Akedo fans looking to build their perfect team. Come on down and join the fun!

The Triple Strike Tag Team Arena works with all Akedo Warriors so you can put on your very own Akedo tournament! Will your Warriors be on the winning team and deliver the Ultimate Split Strike? It’s time to triple the action! Get Ready! Fight! Split Strike! 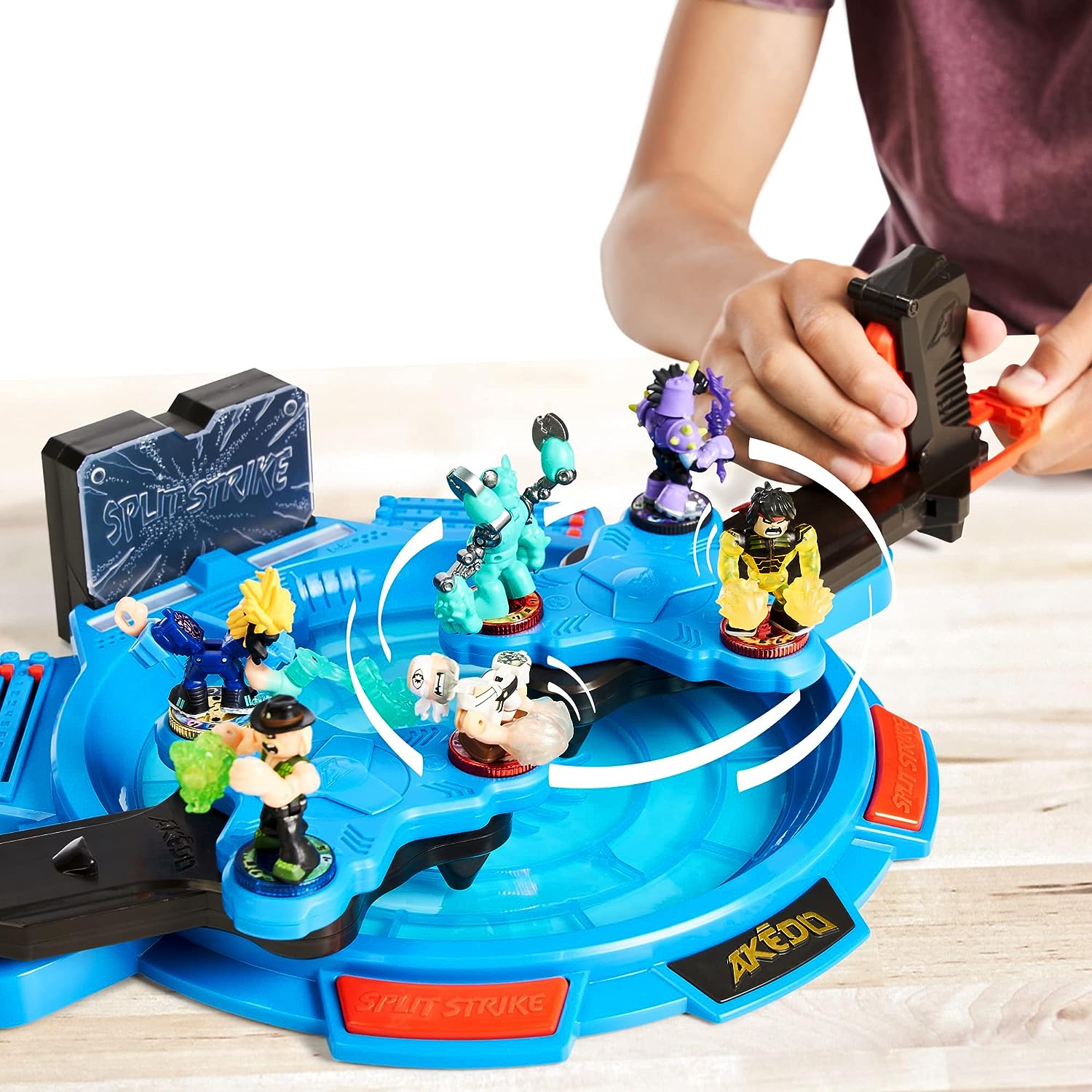 » Enter the Akedo Powerstorm Arena to become the Ultimate Arcade Warrior!
» Special Triple Tag Controllers allow you to switch Warriors mid-battle.
» Tag in and out of the fight and beat your opponent!
» As you fight it out, hear over 40 real battle Sound Effects blast out!
» Watch as the Scoreboard lights up as you hit a Split Strike!
» This Arena set comes with 2 Warriors that are exclusive to this playset
» Batteries required: 3x AA batteries (Not included).