Amazon.com
Get ready for the thrilling action and adventure with this Thrash N Devour T-Rex! This dinosaur action figure is 21 inches long and has enhanced chomp and thrashing actions, roaring and thrashing sounds. With a jaw that stretches unbelievably wide to issue mighty roars, chomp down on unsuspecting prey, then thrash them unmercifully. Comes with a cool marbleized look! ​ 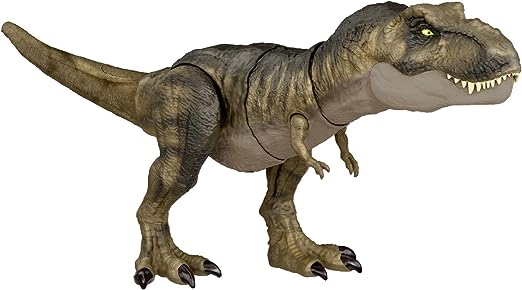 – Press the button on the tail for a mighty ROAR!
– Lift the tail up and the T. rex bends down to pick 3.75-inch human or dinosaur action figures.
– Move the tail down and it swallows human figures whole!
– Then manipulate the tail to create dramatic thrashing action and sounds.

Other figures are sold separately. It’s a must-have addition to any dinosaur toy collection and lets kids re-enact key scenes from the movie. They can use moveable joints to pose in a ferocious display.

Makes a great gift for lovers of dinosaur action play aged 4 years and up. Colors and decorations may vary.

Product Safety
Warning: Not suitable for children under 3 years. For use under adult supervision

» Jurassic World Dominion Thrash N Devour Tyrannosaurus Rex brings playtime adventure and thrills to kids
» Comes with a cool marbleized look, movable joints, realistic sounds, and exciting movements!
» Move the tail up and the T. Rex bends down with jaws wide to chomp on human or dinosaur figures
» Move the tail down and it swallows human figures whole! Other figures are sold separately
» Move the tail up to drop the dinosaurs, Pull out the human figures; Start all over with thrashing & devouring play!
» Move the tail to control the T-Rex and create dramatic thrashing actions and sounds with figures in her jaw!
» Press the tail button on this 21-inch-long figure for a mighty dinosaur Roar!
» Download the free Jurassic World Facts app (Android and iOS) and see dinosaur play get REAL!
» Find the hidden DNA code, Scan it with any smart device to initiate AR (Augmented Reality) options
» AR lets kids study the dinosaur in the lab with fun visual learning and explore different modes, like thermal and x-ray!
» Take it to the next level – Bring dinosaurs into our world through AR -make the dinosaur appear in any room. RUN!
» Some activities may require in-app purchases. Data rates may apply.
» Batteries required: 3 x AG13 (LR44) Button Cell batteries (included)
» Makes a great addition to the at-home Jurassic World of any dinosaur lover. Get ready to Thrash ‘n Devour!