Paw Patrol Transforming City Fire Truck is straight out of the Paw Patrol Movie and into your home! Just like the movie, this Paw Patrol truck has incredible transformations – extendable Ladder, Launcher, Lights, Sounds, and more! This Marshall’s Transforming City Fire Truck has a real working ladder that rotates 360 degrees. Ladder extends taller than ladders on other Paw Patrol trucks. This means that your little hero can reach the tallest buildings in their rescue missions.

Amazon.com
Bring the movie actions and excitement to life with Marshall’s Transforming City Fire Truck! Besides the extendable and rotating rescue ladder, it features a massive pop-up water cannon launcher, lights, sounds, and more! With these fun features, team up with Marshall to play out your own movie-inspired rescues.

[Click any image below to view Full size on Slider]

Get ready for bigger, bolder rescues! Roll up to the scene and transform the truck by pulling back the top. Rotate the rescue ladder. Extend it to reach tall buildings in Adventure City. Slide figures down the back of the ladder to safety, landing on the trampoline rescue net. Activate the truck’s pop-up water cannon launcher! There’s even flashing lights and realistic sounds! Push the button inside the truck to make it pop up and load the projectiles (2 included). Press the launcher to put out fires and takedown obstacles again and again – it’s so fun! 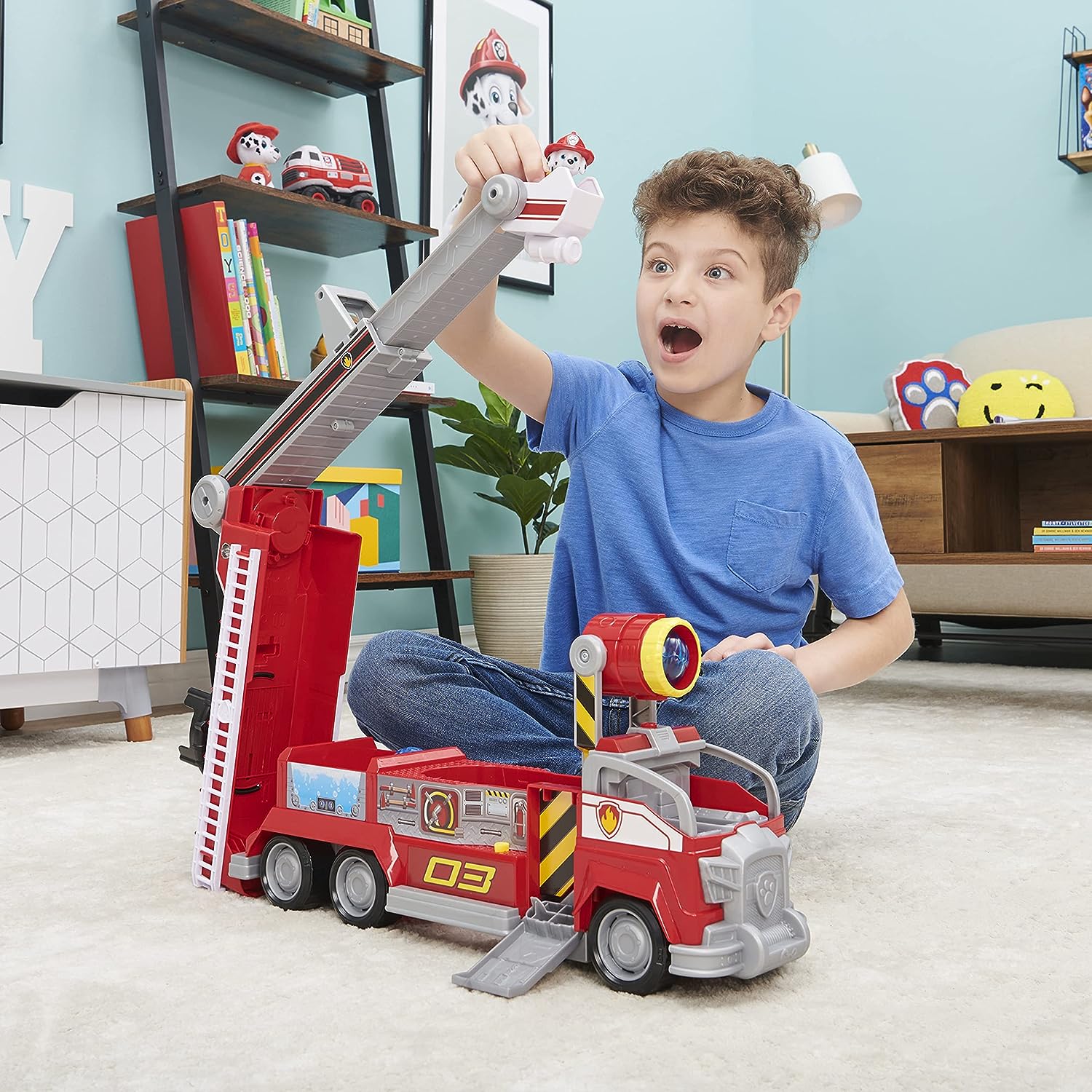 For even more ways to play, this toy truck even has two detachable ladders to use in your adventures. After an action-packed day, store the projectiles inside the vehicle and close up the truck until your next mission.
When trouble strikes in Adventure Bay, Paw Patrol is there to save the day! Because no job is too big, no pup is too small! Watch as Paw Patrol works together to keep Adventure Bay safe. Whether it’s a cat in a tree, a chicken running free, or a train off the tracks, they always find a way to help those in need! Check out full episodes of Paw Patrol on Nickelodeon! This Marshall’s Transforming City Fire Truck will be a great gift for kids and Paw Patrol fans.

• This Paw Patrol movie truck has epic transformations, just like in the movie!
• Lift the top back, rotate and extend the ladder and press the button to pop up the projectile launcher!
• Ladder extends taller than ladders on other Paw Patrol cars. Can reach the tallest buildings in your rescues!
• The Paw Patrol Transforming City Fire Truck’s ladder rotates 360 degrees
• Slide toy figures down the ladder’s slide to safety and land on the rescue net!
• Marshall’s truck has a huge water cannon launcher! Press the button inside the truck to activate
• Load a projectile (2 included) in the Water cannon launcher, press the button, and launch!
• The truck even has flashing lights and realistic sound effects (batteries included)!
• Paw Patrol kids toys, action figures, toy cars, and playsets are perfect birthday and Christmas gifts
• For kids ages 3 and up, to create missions with their favorite Paw Patrol pups!
• Space onboard for 2 pups (additional figures sold separately). Perfect for playing out Paw Patrol stories
• Battery: 3 LR44 Alkaline, Required, Included. Dimension: Depth: 6in X Height: 14 in X Width: 20.5 in